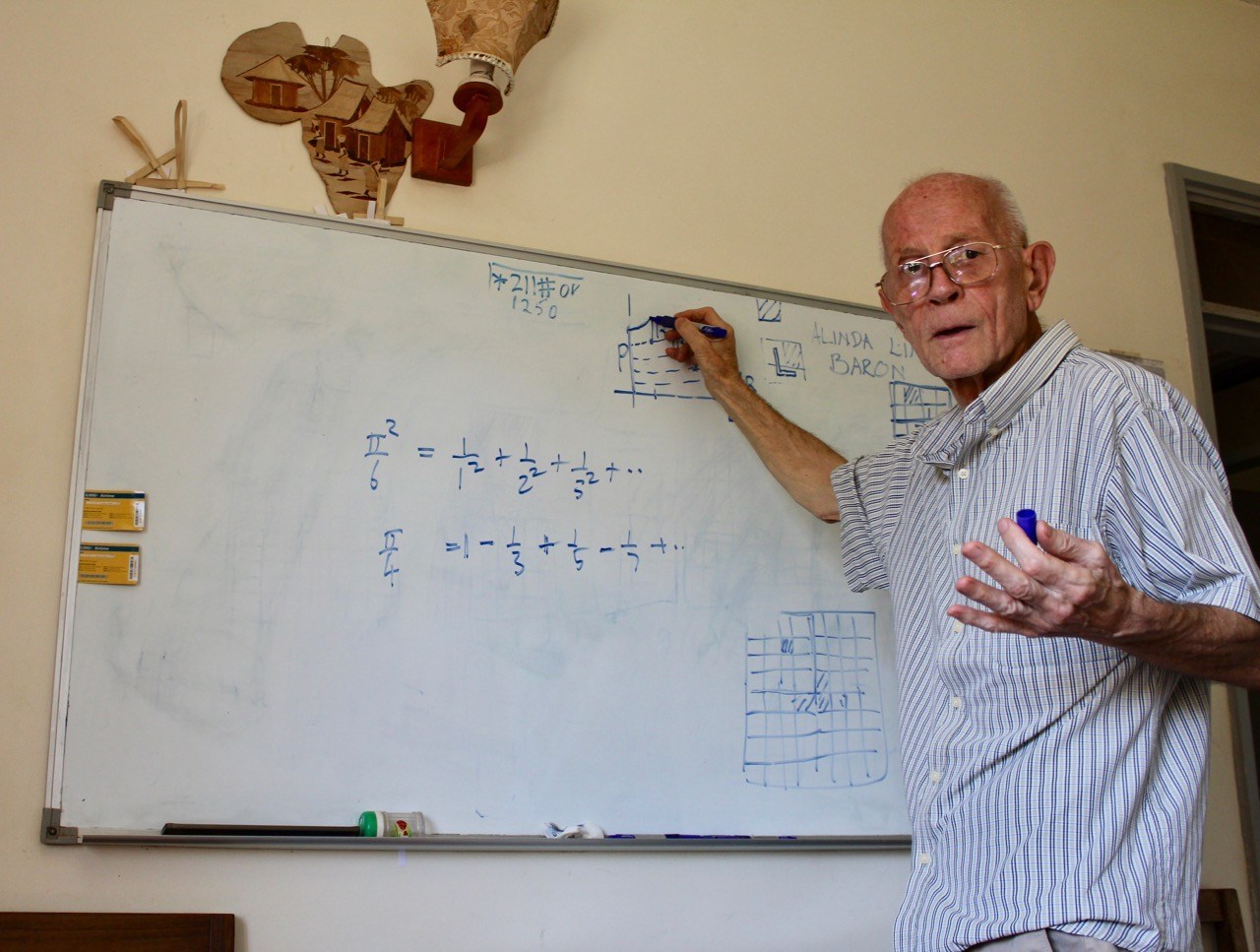 Legend has it that the Rev. Dr. John Denmead Smith loves mathematics so much that he counts his steps every day when walking to teach his classes on the Uganda Christian University (UCU) Mukono campus.

“Well, I suppose I have done that,” the noted math teacher reflected in his British accent. “I hadn’t thought much about it really, but I do know precisely how long it takes me to get there.”

The rapid steps from his T1 apartment in UCU’s Tech Park area to a single-level building below the campus’ student dining hall took 10 minutes. The last week of February 2019, he walked them one last time. On March 11, he boarded a plane in Entebbe to fly to his Beverley, England, home – for good.

“Dr. John,” as he is known, has been a fixture at UCU for 13 years.  Hailing from the United Kingdom, he is UCU’s most tenured teaching faculty from the Western World.

“I won’t be back this time,” John said while stuffing clothes and papers into an opened green suitcase on his apartment couch. “I’m not sure how I feel about it really. But I thought about leaving a year ago. I am 75, you know.”

In truth, John, born in 1944 in the United Kingdom, will turn age 75 on June 13. In the days before leaving the university campus and with the acknowledgment of the difficulty in summarizing a quarter-century of living, he checked off six key areas:

Why mathematics?
“From when I was a small child, I always liked numbers, adding and multiplying them. I was about 17 when geometry hooked me in. I found the shapes and sizes and properties of space fascinating. It just went on.”

Why the priesthood?
“Even as a child, it occurred to me that I might want to be a priest some day. Then, when I was at Malta, a priest suggested the vocation.  And somehow, it did work out that way. At Winchester, I was a chaplain and a math teacher. I would go into the boarding houses and say prayers with the boys before their confirmation class. I was never a parish priest, but I did work part time in a parish.”

What about family?
“I was told our family original name was “Smelt” and not “Smith.” Ihad a brother, David, who died. I have an older sister who lives two miles down the road (in England) and lots of nieces, nephews, great-nieces, and great-nephews. I enjoy company, but I don’t mind being on my own. Look at Albert Einstein. We remember him for his intelligence and theory of relativity and not necessarily his family.”

Why Africa?
“For a long time, I wanted to come and serve in Africa.”

Why UCU?
“When I was preparing to retire from Winchester, my Bishop (the late John Taylor, a former missionary in Uganda) suggested Uganda Christian University as a place for me to carry on both as a priest and a teacher.  Stephen Noll (former UCU Vice Chancellor) agreed. While I haven’t functioned formally as a priest here, inevitably being a priest influences the way that you live and work and how you relate to people.”

At UCU, John Smith taught undergraduates, generally around 35 in a class and mostly in foundational courses, but also in such subjects as financial management and linear algebra. He reached roughly 2,500 students in 13 years.

“I tried to help them, to make them think,” he said. “I hope I did.  I yelled at a few students, which wasn’t right, I suppose. I caught a couple cheating and that required a lot of meetings. But mostly it was enjoyable here.”

While most students at his school in Winchester were white, John was amazed at “how quickly I didn’t see color” in the students at UCU. A few students became special friends over the years with more than a few getting their tuition and other expenses paid by the math teacher they call “father.” Some came for dinner that his Ugandan helper fixed once a week in his modestly furnished apartment.

When he wasn’t teaching, he mostly stayed in the apartment. John’s occasional, always brisk walks out the university gate were generally to buy rolex (an egg-and-bread local food) on the street.

Prior to coming to Uganda, John published a couple research papers that garnered academic attention. He pulled out one on yellowed, stapled paper.  The title was “Ptolemaic Inequities with Odd Powers.” Ptolemy’s theory is that inequality becomes equality when four points on placed a certain way on a circle.

“Not sure why I kept this,” he said, turning it over. “It was important to me at a time, but not so much now.”

Discarding items is part of moving on. A small TV set went to the housekeeper. In early March and from John’s UCU apartment, eight pairs of shoes were scattered on the floor and books and clothes were on a table, trying to make it into three bags with 13 years of accumulation. A worn, open Bible rested on four, stacked plastic chairs.

“I have 27 people I would like to say goodbye to and give a few more things to,” he said, referring to the number of names handwritten on a piece of paper.  “Twenty-seven. That is a pretty good sum total, don’t you think?”

Article kindly provided by Patty Huston-Holmes of the US Partners.